An Overview of Auditory Displays and Sonification

Auditory Displays are systems where a human user makes sense of data using his/her listening skills, like for instance any data under analysis or data that represent states of the information processing system. Auditory displays include the information pre-processing system (A), the task, the techniques for data processing and computation (B), the sonification engine (C), sound signal amplification, the effectors (speakers, headphones) (D), the anticipated user, his/her listening abilities and the situational context (background sounds etc.) as depicted in the following figure.

Sonification is the use of sound – mainly non-speech audio signals – for representing or displaying data. Similar to scientific visualization, sonification aims at enabling human listeners to make use of their highly-developed perceptual skills (in this case listening skills) for making sense of the data. More specifically, sonification refers to the technique used to create a sound signal in a systematic, well defined way, that involves data under examination as an essential ingredient for sound computing. See also the definition of sonification. 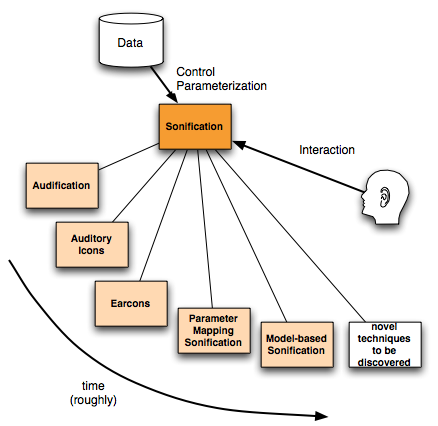 The motivation for using non-speech sound in human-computer interactions is manifold, because:

Particularly in contexts where the visual sense is already highly loaded, it makes sense to consider sound as a modality to give a better distribution of information. For some users (such as visually impaired people, or surgeons in an operating theatre) the visual sense is typically otherwise blocked, so that sonification offers the unique opportunity to display information. A strongly promising application field, however, is the exploratory analysis of high-dimensional and complex data as addressed in the field of data mining and multivariate statistics. The better we can bring the human user in contact with complex data, the more likely he/she will gain insight (insound?) into the data. Combining visual/auditory/tactile modalities leads to multimodal data exploration techniques, and this is sometimes referred to in general as data perceptualization. The sonification application page gives an overview.

Interactive Sonification puts a particular focus on those systems where the user is tightly integrated into a closed-loop sonification system. The idea is that interaction is as important for understanding and using auditory displays efficiently as multiple views are necessary to understand for instance the 3D geometry of objects in the world. Interaction binds the user’s actions to acoustic reactions, and thus creates modes of fast and seamless navigation and exploration, and ultimately, the experience of flow while performing an activity. We are eager to understand how interaction in sonification can support the utility, effectiveness, acceptance and perceived aesthetics of auditory displays. ISon, the Interactive Sonification Workshop series, launched in 2004 by Thomas Hermann and Andy Hunt in Bielefeld, Germany summarizes the progress in this research area. More information is available at www.interactive-sonification.org.

Auditory Displays that close the loop between the human listener and the system may have different forms, that mostly correspond to different tasks. The following figure shows how sonification can be integrated into a closed-loop system.

In all cases, the sonification module generates sound dependent on the data and interactions. However, there are different degrees to close the loop.